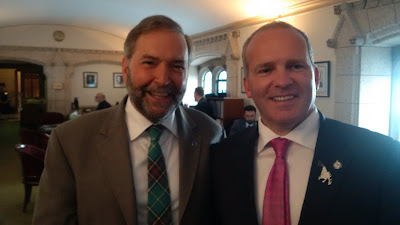 Former NDP MP explains why he joined the provincial PCs

The following article — the fourth in a special series — was published in last week's Newfoundland Herald (Feb. 14th-Feb. 20th).


Ryan Cleary served as NDP Member of Parliament for St. John’s South-Mount Pearl between May 2011 and October 2015. Fourth in a special series.

The Blackberry vibrated in my jacket pocket.

I had asked her to contact me when she knew — “for sure.”

It was my third federal campaign, and I never could stick around on an election night to watch the results trickle in.

I had to take a walk in the Newfoundland air.

“How many polls are in? Is there still a chance?

I wasn’t shocked, or stunned, or overly disappointed. Standing there in Bannerman Park in downtown St. John’s, on the crisp evening of Oct. 19, 2015, it was relief that washed over me.

After 78 drawn-out days, the longest federal election campaign in modern Canadian history was finally, thankfully, over.

The next call I received was from federal NDP Leader Tom Mulcair himself, who said I was his “political hero,” which was nice to hear.

Tom was no Jack Layton in terms of one-on-one warmth or personal chit chat at the back of a caucus room, but the two of us got along just fine.

We were both shoot-from-the-hip, no-holds-barred fighters from humble starts.

Tom made sure to wear a Newfoundland tartan tie in the House of Commons at least once a session, and I made sure to have my picture taken beside him when he did.

Tom usually visited Newfoundland and Labrador once a year for a stroll around Quidi Vidi during the Royal St. John’s Regatta, and, later in the evening, George Street. He also insisted on fish and chips (Leo’s first choice, Ches’s second), making sure to wash it down with Pineapple Crush. (How’s that for true love of Newfoundland?) 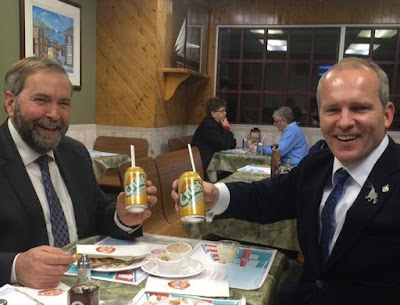 I had my issues with the OLO (Opposition Leader’s Office), but not so with Tom directly, who I supported in the leadership race. Indeed, I found myself drawn to MPs from Quebec more so than other provinces for their character, passion, and sense of place.

I didn’t blame Quebecers personally for screwing us over with the incredibly lopsided Upper Churchill contract, refusing to renegotiate, and blocking the transmission of Labrador power through their territory, but I made sure they were individually well aware of the ongoing, monumental injustice.

That said, Tom contacted me directly in the summer of 2013 and asked me to remove a Facebook link I had posted to a Globe and Mail article critical of the infamous Upper Churchill contract and its long-term consequences.

I did as my leader asked, even though I had refused an earlier request from his staff. After some consideration, I decided it wasn’t my hill to die on.

During my first year in the House of Commons I wore a lapel pin in the shape an old master mariner’s map of Newfoundland (I was once asked by another MP whether the pin was a Ninja star). Until one day, a Conservative cabinet minister from Quebec, Steven Blaney, made an observation: “Your pin, it does not include Labrador,” he said. “Does that mean we can have our Labrador back?

“Go f—k yourself,” I said, half in jest (Blaney and I were friends from the MP gym), but I beat it home to a jewelry store in St. John’s to have a piece of Labradorite added to the pin, representative of the Big Land. 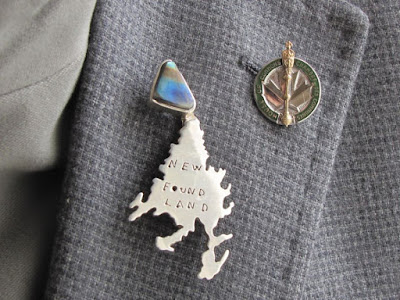 I wore that pin for the remainder of my time in the Commons — standing up not just as a proud NLer, but as a proud federal New Democrat — until the very end, that crisp October night last year when I lost my seat.

Then I was free, and on to the next adventure.

One of the MPs I admired most in Ottawa was Peter Stoffer of Nova Scotia. MacLean’s named him most congenial MP for six years in a row until 2013, when, to the shock of Parliament Hill, he lost the crown. The upset would have been historical had he not won Parliamentarian of the Year. 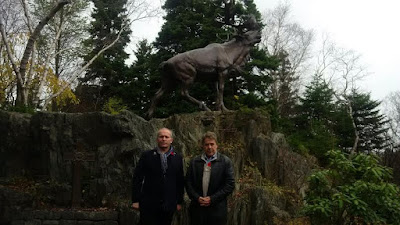 After his defeat in the October election, Stoffer proposed a number of changes to the NDP, including disaffiliating the federal and provincial parties.

I couldn’t have agreed more.

From my perspective, the federal NDP has an in-it-to-win-it attitude, while the provincial NDP was/is content to serve as a social conscience. The  difference is night and day.
Stoffer also suggested the NDP break its labour ties.

“No political party should be tied to any … one group over others. We should be a true democratic party for every single Canadian,” he said. “Labour and the NDP need to have that mature conversation and say ‘let’s be the best of friends, let’s … work together for social change in this country’, but not necessarily need to be formally aligned.”

Unlike the Conservatives or Liberals, the staff of the federal NDP were unionized, which put us at a distinct disadvantage.

In the final weeks of Parliament in the spring of 2015, NDP staffers (many of whom were young and fresh to the workforce) were staging work-to-rule protests over contract issues. Many didn’t seem to realize that unless their MP kept their seat, they would (and did) lose their jobs.

I was not comfortable with the close relationship between the NDP, federal and provincially, and the unions — more specifically, the Fish, Food and Allied Workers’ union.

As a NDP MP, for example, there was an unspoken rule that I could not take a public stand on a fishery issue without first running it by the FFAW for the union’s approval.

In the case of the cod “food” fishery and the call for an extended season (which I championed), the FFAW would agree with it, but only if a tagging system was brought in at the same time to keep track of the fish that were taken.

I didn’t disagree with the stand. My problem was reporting to the FFAW in the first place, especially when I saw the union in a conflict over the funding it received from the federal government for administering programs.

After I lost the federal election, I soul-searched in terms of my next move, and — after consulting with close friends and family — decided to run provincially. I couldn’t see myself ever returning to Ottawa as an MP, having been there, done that.

Besides, if we are to improve our lot in Confederation, the motivation for change must come from the province.

The choice then was which party.

Then PC Premier Paul Davis and I were close, having worked together to pressure the Harper Conservatives to live up to a commitment to compensate the province for relinquishing fish processing control as part of the Canada-EU trade deal.

The Trudeau Liberals had swept all 32 federal seats in Atlantic Canada, and there was a real possibility of a similar sweep provincially by the Dwight Ball Liberals. The way I saw it, the only party positioned to beat back the tide was the PCs.

Two Tory cabinet ministers reached out to me after the federal election, and the premier himself invited me to his eighth floor Confederation Building office for a sit down.

I informed the premier that my chief reservation was P3s or Public Private Partnerships for the construction of long-term care facilities around the province. But once the Davis government decided to hold off on the decision until after the election, which I figured the PCs would lose anyway, I was good to go.

Upon my request, I had met with Earle McCurdy, Leader of the NDP and former president of the FFAW. I informed him of my intention to run provincially, and even raised the issue of a district to run in — Virginia Waters-Pleasantville.

We never spoke again after that meeting, and I made my decision.

I chose to run for the PCs in the new district of Windsor Lake in east end St. John’s because I had raised my boys there and felt connected. The fact that Liberal heavyweight Cathy Bennett would be my opponent was secondary. I made it a rule in my career never to let fear stop me.

I knew a few days into the election that I didn’t have a chance. The anti-Tory tide was too strong, combined with voter anger at my decision to “betray” the NDP.

If I had my time back would I have made the same decision? No, the public backlash — particularly on social media — was absolutely devastating to my family.

Posted by fishermansroad at 11:12 AM

You’re a political animal; nothing wrong with that.

While I have trouble imagining how a social democrat can suddenly become a conservative, more of less the opposite of a social democrat, I can agree with Cleary and Stoffer and other social democrats who are calling for the end to the NDP's official affiliation with unions. I have nothing against unions. I wish there were more of them. They bring a lot of needed justice to the workplace and much of it spills over to the non unionized workforce. It would be one thing if all union members were forced to vote NDP as ridiculous as that sounds, but they are far from even loyal to the NDP and regularly vote for other parties.

As for Cleary, if he is able to sleep at night with this ideological leap from left to right then I think that reveals more about the man than any of his explanatory words. This is not a man of moral conviction. this a man of opportunistic ambition.

I felt at the time like it was crass opportunism. Read this, particularly the admission that you would have run for whichever party would have you, confirms the opportunism part. However, opportunism isn't necessarily bad. You've been a good, proud representative for the province, so I think the "crass" part was somewhat harsh.

Best of luck in the future.

The addition your pin was an afterthought that incorrectly depicts Labrador as being a fraction of the size of Newfoundland.

Appropriate for a Newfoundland nationalist, I would say.