Former offshore trawlermen demand investigation into what happened to millions of dollars generated from offshore crab quota meant to support them, and how it was sold without their knowledge for fraction of value to Conne River First Nation

The Katrina Charlene and the crab quota it was built to fish have been in the news for almost 20 years for their connection to the FFAW. The story made national news in February when a Fishery Officer alleged DFO kept quiet a conviction against the trawler, so as to not embarrass the union. Today, there’s news the quota sold recently for $1 million, a fraction of its estimated value, to Conne River First Nation. The boat and quota have been sold, but questions remain. What happened to the tens of millions of dollars generated by the crab quota? Fisherman’s Road lays out the story as it’s never been told.

Final of a three-part series.
By Ryan Cleary

The controversial offshore snow crab quota fished by “the union boat” for almost 20 years — generating revenues estimated at between $30 and $60 million — was quietly sold late last year to the Miawpukek First Nation at Conne River for $1 million.

That’s according to Ches Cribb, the one-time FFAW executive, and president of the company that held the quota, Offshore Fish Resource harvesters Inc.

The news raises the question why the offshore crab quota that reached as high as 500 tonnes (1.1 million pounds) sold for millions of dollars less than market value? The going rate today for a small supplementary crab licence (65,000 pounds) is more than $2 million.

Questions are also being raised about transparency and accountability. The crab quota was supposed to support a cooperative of trawlermen displaced by the cod collapse of the early 1990s.

Only some trawlermen say they’ve never been given an accounting of the revenues from the quota over the 24 years it was issued, and say they weren’t consulted about its sale.

While the crab quota was sold in December, the trawler Katrina Charlene — a.k.a. the union boat, which was built in 2001 to fish the crab quota — was sold in 2019 to RS Marine Ltd. (owned by sole director, Rex Simmonds), and renamed the Patrick and William.

Terry Barnes and other offshore trawlermen who worked aboard the Harbour Grace-based trawler Northern Kingfisher in the late 1980s/early 1990s are demanding an investigation.

“They had no right to sell the quota that was not theirs, and a full investigation should be made into the money that was made from the crab, the sale of the quota and the boat, plus a private audit of everyone who received money from the crab,” said Barnes, who tried unsuccessfully to get an offshore crab quota for the Kingfisher’s crew in the 1990s.

“There should be complete transparency. You have trawlermen who never got no work after, and went on social assistance or packed up and went to Alberta. Where did all the fucking money go?”

A spokesman for the Department of Fisheries and Oceans (DFO) in St. John’s confirmed recently that the mid-shore crab licence previously held by Offshore Fish Resource Harvesters Inc. was reissued to the Miawpukek First Nation at Conne River in late 2020.

“DFO is not involved or aware of the details of the arrangement between the parties,” the spokesman said.

Fisherman John Cabot, who was also issued an offshore crab quota in the mid 1990s, joins Barnes in calling for an investigation.

He estimates the crab quota held by Offshore Fish Resources Harvesters Inc. may have generated upwards of $60 million in revenue over the 24 years the licence was fished, based on an average crab price of $2.50 a pound. 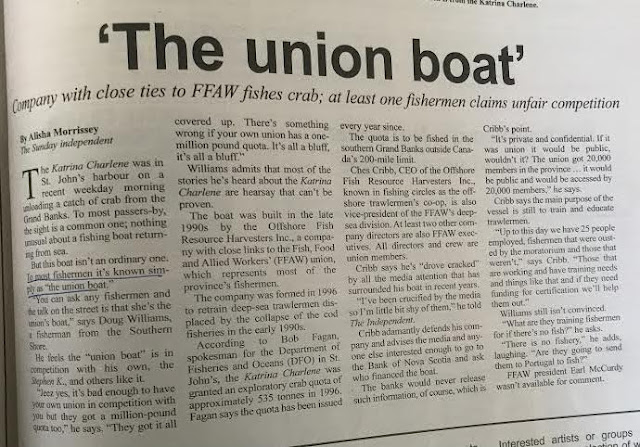 According to the province’s Registry of Deeds, the company’s seven directors include Cribb, and Reg Anstey, a former secretary-treasurer of the FFAW. Anstey currently serves as chair of the FFAW’s elections committee, and head of the province’s Fish Processing Licensing Board.

In an interview, Cribb said the snow crab licence was transferred late last year to the Conne River Miawpukek First Nation for $1 million.

Cribb explained he and the board of Offshore Fish Resource Harvesters Inc. thought the crab licence had no value because it couldn’t be transferred as it was.

A spokesman for DFO explained that the crab quota issued to the company was an exploratory one, and could not be sold. However, the quota could be converted into a commercial or communal licence, and then transferred.

The spokesman said precedence for such a move had been set in 2008 when three other offshore exploratory crab quotas that had been issued in 1996 (including Cabot’s) were converted to commercial licences, which remain active to this day.

At one point during an interview, Cribb said he asked DFO why the department hadn’t done the same with the crab licence issued to his company, Offshore Fish Resource Harvesters Inc., but was told “there was too much politics.”

Cribb said he was “approached” by someone (he wouldn’t say whom) not to renew the crab licence so it could be reissued to Conne River. He said he liked the idea because the licence would go to another “community that would benefit.”

When contacted, Chief Misel Joe of the Conne River First Nation was asked to confirm the $1 million purchase price of the crab licence, as well as the rumour that the trawler Patrick and William (formerly the Katrina Charlene) is now fishing the crab quota for Conne River.

Joe said he wasn’t familiar with such details, but would look into it. He did not return calls.

According to Cribb, Offshore Fish Resource Harvesters Inc. walked away from the transfer of the crab licence with $750,000 after taxes, money that will contribute to paying the cost of health insurance for roughly 160 offshore trawlermen who were shareholders in the company.

“We will continue to put money into the pockets of trawlermen until we run out of money,” he said.

Meantime, Offshore Fish Resource Harvesters Inc. is described on the U.S.-based Dun and Bradstreet business directory as having “25 total employees across all of its locations and generates $5.31 million in sales (USD).”

Again, Cribb could not say how much revenue or profit was generated by the snow crab licence over the 24 years it was held by the Offshore Fish Resource Harvesters Inc., or provide a formal accounting of how the money was spent.

However, he strongly disputed the $60-million revenue figure put forward by Cabot, suggesting it was closer to half that amount.

Cribb said his elected role with the FFAW ended in 2010, and he was never a full-time employee of the union.

Rather, in the mid-1990s he managed a government-sponsored training and adjustment program to create opportunities for displaced trawlermen that was funded through Ottawa’s fish-aid packages at the time, including The Atlantic Groundfish Strategy (TAGS).

Cribb says when that money began to run out, he travelled the province and signed up trawlermen as shareholders for $1 each. He figures 75-80 displaced trawlermen fished the crab quota over the years.

Between 1996-2001 — the years prior to the construction of the Katrina Charlene — the company made no profit, Cribb said.

He added the decision to build the fishing vessel over 100-feet in length was made upon the advice of DFO officials, so as to not cause “political upheaval.” (Cribb said he recalled those specific words from DFO at the time.)

Meantime, former Fishery Officer Jason Bateman — who alleges a 2012 conviction against the skipper of the union boat for illegally fishing undersized crab was kept quiet by DFO so as to not embarrass the FFAW — told The Globe and Mail in February that too often the lines are blurred between DFO and the FFAW.

He said the union exerts enormous power and influence over the federal department.

Indeed, in terms of organized labour the FFAW-Unifor represents the entire Newfoundland and Labrador fishing industry — small-boat fishermen, offshore trawlermen, fish plant workers, and fish farmers — plus workers in other industries from hotels and on oil tankers to brewery workers and observers on seismic ships.

The FFAW is involved directly in fisheries science and management, and acts as the gatekeeper to a long list of government-funded programs from test fisheries for cod to offshore crab surveys. The union controls entry into the industry through the Certification Board, and has the exclusive right to dockside monitoring — even as it fishes its own quotas of redfish in the Gulf of St. Lawrence.

Bateman worries that nothing will come from his whistleblowing.

“If a Fishery Officer feels as strongly as I do to come forward publicly and nothing is done, then maybe there’s no hope.”

As for the way forward, Bateman also recommends an independent investigation, but one specifically into the relationship between the FFAW and DFO.

“Someone needs to take a good hard look at how the two of them get along, because the relationship isn’t working for the fishery, the communities, or for Newfoundland and Labrador.”

With files from Jenn Thornhill Verma.

Ryan Cleary, the author, was a St. John's-based journalist for 18 years before serving a term as a Member of Parliament, following which he was elected President of FISH-NL, which made two unsuccessful attempts to break inshore harvesters away from the FFAW-Unifor.

Posted by fishermansroad at 11:28 AM