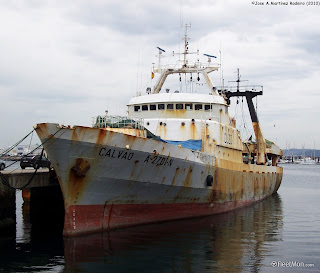 Five foreign trawlers have been issued a total of six citations in recent months for illegal fishing on the Grand Banks of Newfoundland, outside Canada’s 200-mile limit.

Sept. 14: American trawler Alex Marie; cited in port at Trepassey for directed fishing for white hake on the tail of the Grand Banks. The fish was only to be taken as a by catch.

July 7th: Spanish trawler Ana Gandon, boarded at sea on the Flemish Cap and cited for improper storage of redfish.

June 15th: Portuguese trawler Calvao, boarded on the tail of the Grand Banks and cited for misreporting redfish catches.

May 22nd: Spanish trawler Puente Sabaris, boarded on the Flemish Cap, and issued two citations for misreporting redfish catches.
•••
The North Atlantic Fisheries Organization (NAFO) monitors fishing on the high seas outside’s Canada’s territorial limit, but is generally seen as toothless/useless, unable to enforce the quotas it sets. The owners/skippers of foreign trawlers cited for illegal fishing are not charged in Canadian courts. Rather, under NAFO rules it’s up to the vessel’s home country to follow through with penalties/prosecution. Ottawa has consistently refused to reveal what punishment has been imposed on foreign trawlers, saying the release of such information would be damaging to international relations.
•••
DFO has a website that updates information on foreign trawlers cited for illegal fishing in NAFO waters, but — until this past week — the site hadn’t been updated since last March.
•••


Canada’s commissionerers to NAFO include Bruce Chapman, executive director of the Canadian Association of Prawn Producers, and Gerard Chidley, a fisherman from Renews. The two commissioner jobs — along with the head of delegation position, which is currently held by France Pegeot, the senior assistant deputy minister of Fisheries and Oceans (DFO) — are essentially Canada's “voice” at the table of NAFO.
Posted by fishermansroad at 1:10 PM

All should have to obey the same law & pay appropriate penalties for violations. Ottawa needs to do better to protect the rights of Canadian fisherman and to safeguard the fisheries. What good does it do if they comply and foreign entities are stealing the fish?